The player from Uppsala has won an impressive array of gold medals in Swedish, European and World Championships, both individually and in a team.

He plays masterfully on felt, concrete and eternit.

The course has a Stockholm theme and an artificial grass surface.

Likes artificial grass
“I liked the playing surface. It's slightly slower, more like classic golf. The course we played on isn't MOS classified. But it could be with a few adjustments”, he says.

“Adventure Golf is becoming increasingly popular. And competitive mini golf is increasingly being played on artificial grass. One example is the upcoming World Adventure Golf Championships at the Gullbergsbro mini golf club in Gothenburg in May. This trend is definitely something that can take mini golf to new heights”, says Carl-Johan.

City Golf Europe is the main sponsor of the World Championships at Gullbergsbro.


MOS stands for Minigolf Open Standard, meaning that the holes are approved for competitive playing.

Skill should decide
“For me, it's important that the holes are designed so that skill is the deciding factor. An artificial grass surface can give the game an extra element of excitement.”

Long-established company
City Golf Europe in Örnsköldsvik, Sweden has been operating for almost 76 years and is Europe's leading developer and builder of mini golf and Adventure Golf products.

Good luck!
Carl-Johan is rooting for the Swedish contestants in the upcoming World Championships.

“Sweden's best MOS players are from Gothenburg. I hope they do well on their home turf.”

Competition course with accessible for persons with a disability.)

Help us pick a winner!

Calling All City Golf Europe Fans... Help us find the most beautiful hole in Adventure Golf) 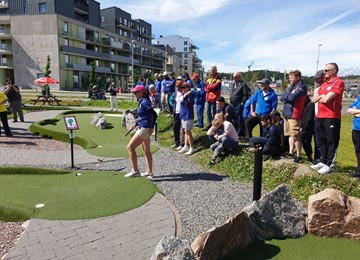