After the succesful introduction of Adventure Golf in the Netherlands in December 2015 with the Jurassic Golf Adventure Park in Gouda, City Golf Europe is nearing completion of its second course -- Adventure History Golf at Historyland in Hellevoetsluis, 30 minutes from the centre of Rotterdam.

Historyland is a new recreation park with a number of fascinating attractions, including a museum displaying prehistoric animals, a collection of World War II artefacts, a bunker, helicopter, a Russian MiG fighter jet, military vehicles, dinosaurs and much more.

Arie van den Ban: "The course comprises twelve holes, which are all works of art. Adventurous, recreational and educational at the same time. That is exactly the idea behind Historyland.”

Construction of the beautifully landscaped course began in February. Special obstacles and features include, amongst other things, a figure of Napoleon leading a charge on his horse, a Mayan temple, the Colossus of Rhodes, and the Pyramids of Egypt. Also, fun is guaranteed by a fishing boat and a landing craft (raft), which have to be used for crossing over a lake to get to the next holes.

A Gold Mining Village is also under construction close to the golf course. Here, children and families can experience first hand the thrill of panning for real gold. This is the first installation of its kind in the Netherlands – one of the latest, innovative and lucrative attractions offered by City Golf Europe.

Both the Adventure Golf course and the Gold Mining Village are due to open at the end of April. Both are certain to attract many more kids, families and other visitors to Historyland. 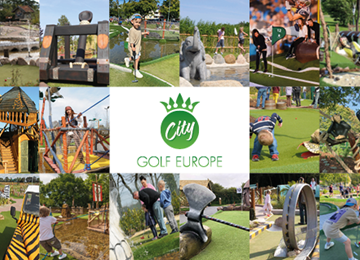